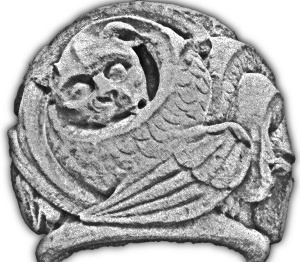 Has this riddle got you chasing your tail?

I am sleepy now. It’s quiet in here. They still treat me with reverence and speak in hushed voices; just as they did in my old home. But there, I had more visitors. Now, I may not see anyone for weeks. Just the cleaning lady; a young girl who has music piped into her ears from a machine to drown out the noise of another machine, the Hoover.

These days, it seems that there is no place for silence; at least not the contemplative kind. That silence was filled with thought. It was companionable and could be shared with others. Today’s silence is empty, a badge of neglect; deserted streets, derelict lives. No-one wants to share that. It is something to fear, to be fought with noise: radio, television, the telephone. People drown their own thoughts in a wave of sound, creating the very thing they dread: loneliness.

Hush! I can see a light under the door. Voices. I have a visitor. It’s the doctor; a thin man in his fifties. His head is covered with wisps of rusty hair, the same colour as his corduroy jacket and the frames of his glasses. Apart from these muted highlights, he is devoid of colour. Like me he is invisible, filled with knowledge for which no-one has any use. But I like him. He has gentle hands. I tingle when he touches me, for he reminds me of another: the first man to caress my skin, the one who made me what I am.

For I have a story to tell. It is an interesting one, full of intrigue and adventure.

He tickled me with a bird’s feather, that first one. He scratched me too. But it was all in the cause of beauty: at least, as far as I was concerned. I was very fussy about my appearance. I would not countenance a blemish of any kind. In those days, I had the vanity of a young girl. Every mark, tattooed onto my skin had to be perfect. So I lay very still while work was in progress.

We spent many hours together; alone, late into the night, keeping our trysts by the light of a candle. A love affair, of sorts, that lasted many years. I was his work of art, that’s what he called me. He even told me once, that I was the love of his life. And him, a man forbidden to marry!

While my skin remained pure and seamless, his began to wrinkle. First, little cracks around the eyes, then the mouth. And the colour in his cheeks, once so fresh and rosy, began to fade. Our time was passing. And I grieved. But he poured his life into me. As he grew thin, I grew fat. As his energy waned, I became stronger, my body girded with leather and metal.

And then, one day, he did not return and another took up his work. It was never the same after that. No-one had his devotion. Or his touch. My first and only love.

I was a beauty with pride of place in the Great House, shown off to all, including kings. I alone had the power to defy royal pretenders. The possessor of many lands, I defeated their greedy schemes.

My word was law and I taught them the meaning of justice.

Criminals were brought before me for judgement and I decided the means of their trial. Water, iron or something a little more irregular: a diet of barley bread and cheese, something so subtle that even my current doctor cannot grasp it.

Yet that humble ordeal felled a mighty nobleman. Earl Godwin, father of King Harold, was accused of murder. He chose the ordeal of barley bread and cheese and scoffed at it. Yet scoffing was his downfall. He ate one mouthful and dropped down dead.

All men wished to possess me. I visited London on several occasions where I was measured for new clothes and my likeness recorded for posterity. I was the talk of the town, examined, admired and, although passed from hand to hand, always treated with respect. Except on one occasion.

In London, I was taken to visit a friend who was to escort me home. However, my friend was absent from his lodgings, so I was left to await his return. The landlady said she would look after me. Unscrupulous jade! No sooner were we alone, than she forced me up the stairs and began to pound on the door of another lodger.

Dr Thomas Leonard was a physician from Canterbury. The sight of me took his breath away. I shuddered as he pawed me with his greasy fingers. My beautiful skin! The doctor said that I was a rare specimen and struck a bargain with the landlady for 5 shillings. I was bought and sold like a slave-girl in a market. It was a dark chapter in my history.

After that, men quarrelled over me like dogs over a bone. I was taken to the Court in Chancery where lawyers in powdered wigs argued in a language that I could not understand. For days, they strutted about in a foul-smelling, airless room: presenting arguments, interrogating witnesses; crows who believed themselves peacocks displaying to an empty gallery.

This long-winded, meandering justice was new to me. It did not have the immediacy of the ordeal. No blood-curdling test for truth or lies. Rather the combatants wore each other down by talking. On and on they went. In a way, I suppose it was a kind of ordeal. The judge certainly thought so. Constantly yawning and rubbing his eyes, he had perfected the art of napping while appearing to nod sagely. But, occasionally, his snoring betrayed him!

At last, justice triumphed and I was taken home. And then came the final insult.

On one of my last outings, they dropped me in the river! Do not ask how it happened. I cannot remember. But as I sank through the murky depths, I thought that I had breathed my last. In the filthy mire of the Thames, I felt cold water lapping around me. Barges, cutters, ferries and row-boats: the hulls of boats passed overhead while small fish began to nibble at my skin.

It took them hours to rescue me. When they finally hauled me to safety, they wondered how I had survived. It was all down to my belt. Like any tight-corseted woman of that age, I had been so constrained about the waist that hardly any water had seeped in. All I had to show for my ordeal was a light, crystalline powder which gave my skin a delicate glow.

Once again, I was ahead of my time. It would take them over two hundred years to perfect anything like it for other women. And they would call it make-up and talk about it as if it was something new. Honestly!

But that’s all in the past.

As I said, I don’t have many visitors now. I’m in a home for the elderly. Like them, I’ve lost my voice. Few understand what I say. Only a few enthusiastic doctors who come to examine me. They’re especially interested in my tattoos. Carolingian minuscule, they call it. They say it displays unique characteristics. And they still marvel at my speech: old English with a touch of Jutish. Rather rare, I’m told.

I spend most of my days sleeping. And I dream of going home. To the place where once I lay on a bed of white linen beneath a vaulted ceiling. Perhaps, one day, a new chapter will begin.

This is a slightly altered version of one of the short stories from my book ‘Barley Bread and Cheese’ which was launched last year at Rochester Cathedral. The book is available in both hardback and ebook format from Amazon. The Kindle version is currently free via Kindle Unlimited. For more information, please click here

For information about my novel ‘The Devil Dancers’, please see my website