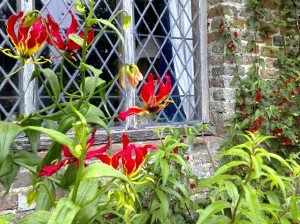 A window on the world: a detail from Sissinghurst gardens

I recently read a Tweet from a bookseller which asked readers if they had adopted a book recently. It was one of those simple, but leading questions that started me thinking.  Yes, I thought. I have ‘adopted’ quite a few literary strays – most discovered lurking on the shelves of second-hand shops.
Yet these have turned out to be some of the most fruitful and interesting reads – particularly for an omnivore like me who is constantly searching for new sources of information for my own writing.
My latest acquisition is ‘Diaries and Letters 1939 – 1945‘ by Harold Nicolson who formed one half of the creative – and somewhat eccentric – marriage with Vita Sackville-West.
This has proved a rich source of insights as Nicolson served in the Ministry of Information and so got to observe the workings of wartime Government, especially Churchill whom he greatly admired.
There are also intriguing references to lunches with Guy Burgess and, on 29th June, 1940 an ironic comment that: ‘Guy Burgess comes to see me, and I tell him that there is no chance now of his being sent to Moscow.’
Set against this are Harold’s letters to Vita whom he clearly loved dearly although he accused her of having a dual personality: ‘The one tender, wise and with such a sense of responsibility. And the other rather cruel and extravagant.’
This reference to Vita’s cruelty and extravagance may well have related to her long-running affair with Violet Trefusis during which the two women eloped to France and Vita escorted her lover dressed as a man. Nicolson followed them and finally persuaded Vita to return home.
Ironically, Nicolson’s letter, dated 31st March 1941, crossed with one from Vita informing him that she had ‘just had the most awful shock: Virginia has killed herself.’
This, of course, was a reference to the writer Virginia Woolf who had been Vita’s close friend and lover. Nicolson’s notes record how he raced home to Sissinghurst to comfort Vita although neither of them spoke of the terrible event.
He also gives poignant details of a visit to Virginia’s husband, Leonard Woolf and how “The house was full of his flowers, and all Virginia’s things lying about as usual.”
Nicolson provides a painful and vivid account of a newly-bereaved home as well as the fact that, at first, Virginia’s body could not be found although it was assumed that she had drowned herself.
On a lighter note, his writing offers revealing – and often humorous – insights into the Nicolsons’ home at Sissinghurst in Kent where Harold and Vita created a world-famous garden.
They appear to have had a friendly relationship with their tenant-farmer Ozzy Beale whose main concern was the prospect of enemy planes landing in his wheat.
My favourite image from this intriguing book? That of a sentry patrolling the tower at Sissinghurst silhouetted against the night sky: ‘In a steel helmet and rifle he looks most picturesque in the moonlight over the parapet.’

1 Response to The Sissinghurst view of World War II