Murder, Martyrdom and the Quest for Bones 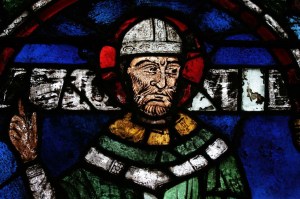 As the sun was setting late in December, four armed men strode through the Cathedral precincts determined to arrest one of the country’s most powerful men – or, at least, teach him a lesson. They had probably been drinking and the sound of their voices and heavy footsteps echoed around the silent cloisters. They tried the latch of a heavy wooden door, discovering, to their surprise that it had not been barred.

Pushing the door open, they blinked, their eyes adjusting to the gloom. Candles dripped pools of light onto the stone floor and tall shadows danced among the vaults and pillars. The vast interior echoed with the voices of monks who had been celebrating Vespers, their breath hanging on the icy air like smoke.

A solitary figure was standing by a pillar. He had met the four men earlier in the day, refusing to break off his conversation with another visitor or rise to greet the intruders. After a heated exchange, the men had been forced to leave by the man’s attendants. Thwarted, they had plotted to return later and resolve the matter.

Meanwhile, the object of their hostility had been ushered into the Cathedral for his own protection, his followers believing that he would be safe there.

But now he was alone and unprotected.

Once more, the men tried to take him prisoner, one trying to lift him from the ground and sling him over the back of another accomplice. The captive resisted, fighting back. An arm was raised. A blow was struck. Then another. The man fell to the ground, his skull slashed open, his brains spilling onto the icy stone floor.

On 29 December 1170, Thomas Becket, Archbishop of Canterbury, former Chancellor of England and erstwhile friend of the king, lay dead on the floor of the Cathedral. It was the end of a tumultuous career and the beginning of a legend.

Becket’s murder is so notorious that most of us assume that we know every detail. However, a closer examination of Becket’s life – and legacy – reveals some intriguing facts.