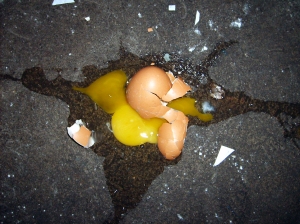 Arguments break out over the strangest things. I once heard a famous actress describing how a domestic row had been sparked off by a milk bottle. A milk bottle? Well, I can do better. My trigger was an egg.

It’s not so much the object that ignites the row, but the circumstances. In this case, it was Christmas – the first with the man who was to become my husband. I was going to treat him to a traditional Christmas. The best he had ever had. Single-handedly, I was going to make the puddings, cook the cake, fill the stockings and decorate the tree.

It was all going to be perfect: a Nigella-fest of soft lighting, glittering decorations, mulled wine and wonderful food. I pictured myself at the centre of the festivities: a calm, unflappable Maitresse d’, conducting proceedings which would, naturally, run like clockwork.

But life’s not like that. Organising Christmas is like trying to restrain a rushing torrent. It has a habit of swamping you. It was a discovery that nearly cost me my future marriage.

I remember it well. I was in the kitchen stirring, measuring, chopping and generally busying myself with preparations for the Christmas cake. I don’t even like fruit cake but I had to make it. It was traditional. Following my Good Housekeeping recipe to the letter, I had just started to add the wet ingredients to the dry when I noticed that I was an egg short. Perhaps I could get away with two eggs rather than three.

“What do you think?” I shouted upstairs to where my boyfriend was trying out a new drill.

“Well, if the recipe says three, it means three,” he replied, unwisely.

So, I asked him – quite reasonably – to nip along to the shops and get some more eggs. He was reluctant. His excuse being that he hadn’t quite finished drilling the socket/widget/thingy that was so important.

I marched around the kitchen harrumphing, checking my watch every thirty seconds. I couldn’t go to the shops myself because, by this time, I was encrusted in flour, egg and candied peel disgorged by the food-mixer. Unlike Nigella’s perfect make-up, I was covered in an unbecoming pebble-dash which had spread all over my face and up into my hair. I would need a full hose-down in the shower and a clean change of clothes if I was to go out. He had to do it.

There was still no movement upstairs except for the incessant sound of drilling. I tried to picture what our bedroom wall would look like when he’d finished. The only image that sprang to mind was the aftermath of a mafia shoot-out.

Trying to rein in my rising temper, I decided to warm the oven. It was new, shiny … and obdurate. I got the lights to work, but no heat. It didn’t matter how much I fiddled, nothing worked. Finally, in a fit of pique, I pressed all the buttons at once. There was a sort of ‘pop’ and all the lights in the house went out.

A voice drifted down from the darkened stairwell.

Trying to hide my mounting panic, I decided that attack was the best form of defence.

And so I did. With a bowlful of raw, half-mixed Christmas cake sitting on the passenger seat beside me. That egg – or the lack of it – nearly ended our relationship.

Since then, I’ve abandoned all Nigella aspirations. The perfect Christmas is a mirage; a last vestige of childhood. But having rejected this bit of adult make-believe, I’ve actually begun to enjoy myself. I buy mince pies and cheat with the bread-pudding mix. (The packet variety is brilliant).

However, I’m not completely cured. This Christmas, we’re going to make a cake – together. So, I’m off to buy eggs and hide the cordless-drill!